SINGAPORE (EDGEPROP) - Michael Wan, senior associate director of Savills Residential (now part of Huttons Asia), has been managing a bungalow on Lakeshore View in Sentosa Cove on behalf of its absentee owners who are based overseas. They purchased the bungalow plot from Sentosa Development Corp in 2005 and developed it.

Back then, they engaged celebrity architect, Chan Soo Khian (aka Soo K Chan), founding principal and design architect of SCDA Architects, to design a 9,800 sq ft, 2½-storey detached house on the 99-year leasehold, 8,613 sq ft site at Lakeshore View. The house was completed in 2010, but has never been lived in. 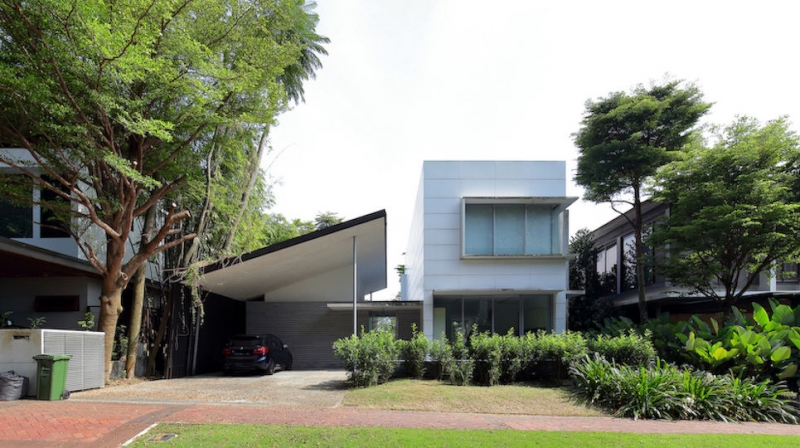 Early last year, the owners, a couple, contemplated immigrating to Singapore and spending their retirement years at their Lakeshore View home. Well aware that the house needed to be renovated as it had been left vacant for more than a decade, the owners engaged Faye Moey, principal architect of boutique architecture and interior design studio, Moya Design Partners, to draw up plans for the additions and alterations (A&A) to the house. Moya Design even obtained the necessary approvals from the Building and Construction Authority (BCA) before work could proceed.

However, the owners have since shelved plans to move to Singapore and have instead decided to sell the property, says Wan, who has been appointed the exclusive marketing agent.

The view of the Serapong Golf Course and the most challenging hole - from the house at Lakeshore View (Photo: Samuel Isaac Chua/EdgeProp Singapore)

Lakeshore View is one of the most secluded areas in Sentosa Cove, notes Wan. There are just 29 private villas along a quiet dead-end street. Seven of the houses overlook the hillside. The other 22 front the golf course and the lake, and the house that is currently on the market is in the middle. “The house has quadruple views — of the golf course, the lake, the CBD skyline and future Greater Southern Waterfront,” says Wan.

It has an 18.8m frontage of the Serapong Course at Sentosa Golf Club, which was voted “World’s Best Golf Club” at the World Golf Awards in 2019. For golfers, there’s a bonus view of the most challenging hole at the course. “I have had potential buyers come into the house and walk straight out to gaze reverently at the green for up to 15 minutes,” relates Wan. “These are avid golfers who have a lot of comments about how challenging that hole is, and how it creates a lot of excitement during the HSBC Women’s World Golf Championship.” The tournament has been held at Sentosa Golf Club since 2014, although the 2020 edition was cancelled due to the pandemic.

The existing three-storey house at Lakeshore View has a built-up area of about 9,800 sq ft. It has an east-west wing configuration. The first level has a room that could be used as a cinema room or a gym, two en suite bedrooms as well as the utility room, store room and helpers’ quarters. The second level contains the family room, living room, dining and open kitchen. The third level of the east wing contains the master suite and junior master suite as well as a roof terrace. 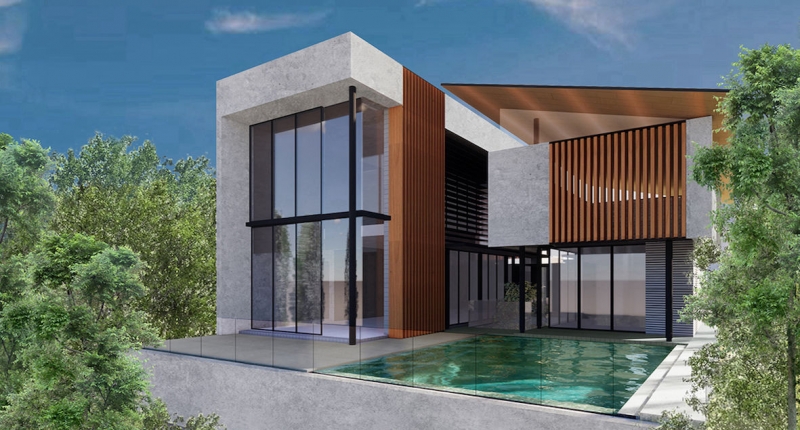 Artist's impression of the new third level on the west wing, which will be connected to the east wing via a bridge (Picture Moya Design)

Based on Moya Design’s proposed A&A, the property will have a new third level on the west wing, which will be connected to the east wing via a bridge. There is an option to add an internal hydraulic lift spanning all three floors at the air well, says Wan. The new third level on the west wing will contain a new grand master suite which will enjoy views of the city skyline and the sea, a spacious walk-in wardrobe and luxurious master bathroom, he adds. It will also have a roof canopy of bronze finish.

The living room will also have a new mezzanine level and a double volume space with full-height glass to maximise the views. A new wet kitchen will be added to the existing dry kitchen, which will be orientated to enjoy the view of the swimming pool, the lake and the golf course.

The first level will have a new lounge that extends into a fully landscaped courtyard. The two bedrooms on this level will now open directly to a garden, and will enjoy views of the greenery. There is an option to amalgamate the two bedrooms into a single bigger bedroom. But the expanded house has enough space for five en suite bedrooms, including the new bigger grand master suite. 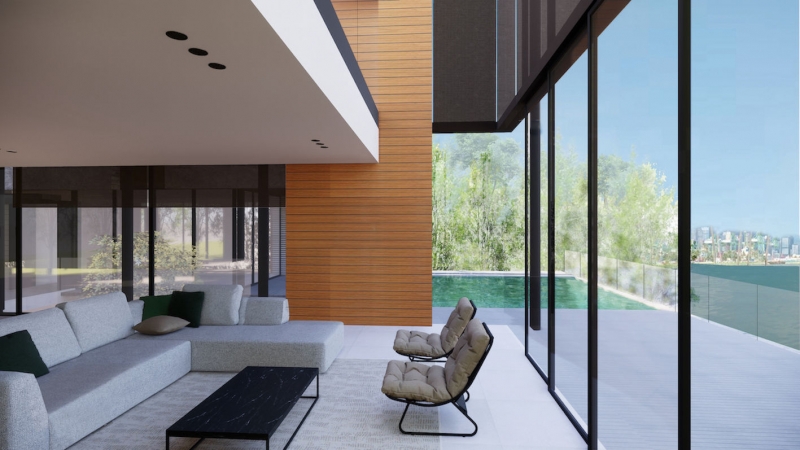 Other improvements in the house include upgrading of the aluminium works, sanitary fittings, lighting, flooring and walls. The house will also have a new façade of stone, textured concrete, with timber accents.

The A&A works proposed by Moya Design will increase the built-up area of the house by another 2,000 sq ft, bringing the total floor area to about 12,000 sq ft. The renovation works are estimated to cost about $2 million, including the cost of materials, estimates Wan. It is likely to take about a year to complete, given the shortage of workers due to Covid-19, he reckons. As a comparison, a private villa that is nicely designed and in mint condition just a few doors down on Lakeshore View is on the market for $18.5 million ($2,467 psf). The house sits on a smaller land size of 7,500 sq ft. But the owner will not budge from the asking price as the house has been well-renovated and is in move-in condition, notes Wan. Such houses will appeal to those who are not familiar with nor interested in undertaking renovation works.

“Many of those interested in the A&A opportunity at Lakeshore View are local investors and developers who are willing to invest their time, energy and creativity in overseeing the renovation works, and therefore in capitalising on the upside potential,” says Wan. 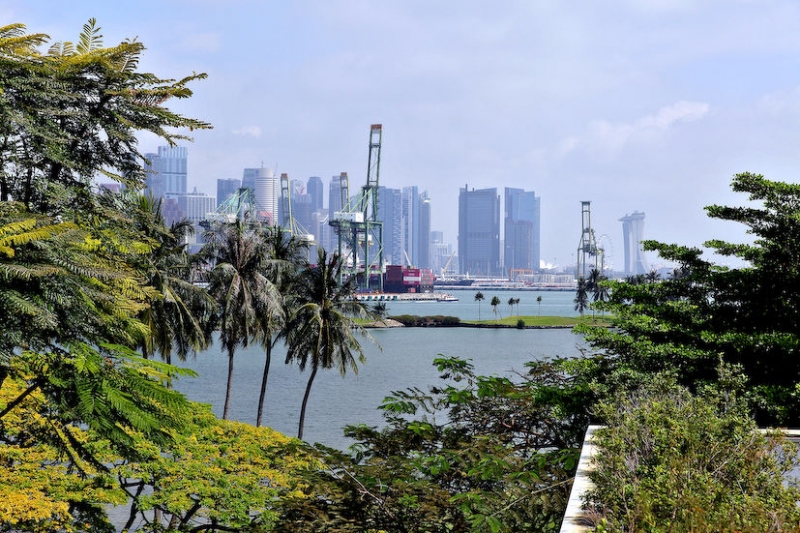 View of the sea and the CBD skyline from the roof terrace (Photo: Samuel Isaac Chua/EdgeProp Singapore)

Sentosa Cove in District 4 is part of the Core Central Region. However, in terms of psf prices, the detached houses are trading at a discount to those on the mainland. The latest transaction in Sentosa Cove was for a bungalow on Ocean Drive that changed hands for $13.3 million in February. The house sits on a land area of 9,042 sq ft, hence the price translates to $1,471 psf.

Meanwhile, on the mainland, a newly completed freehold bungalow at Sunset Place in District 21, was sold for $13.38 million. The house sits on a freehold site of just 7,526 sq ft, which based on the selling price, is equivalent to $1,778 psf.

Wan is therefore convinced that the price tag of $12.8 million ($1,486 psf) for the private villa at Lakeshore View is “very competitive”. “It’s equivalent to the psf price of a suburban, 99-year leasehold, new condo project today,” he says.