Success of Pasir Ris 8 spurs repricing at other developers’ projects

SINGAPORE (EDGEPROP) - On the back of integrated development Pasir Ris 8’s weekend sales performance, where over 85% of the units were sold at an average price of close to $1,600 psf, other developers with projects in the suburbs and city-fringe neighbourhoods are likewise adjusting their prices. (See also: Allgreen Properties previews Pasir Ris 8 integrated development)

This is partly in reaction to recent record land bid prices at government land sales (GLS) tenders. GuocoLand won the site at Lentor Central with a bid of  $1,204 psf per plot ratio (psf ppr) this month. UOL Group along with joint venture partners, Singapore Land Group and Kheng Leong Company paid $1,118 psf ppr for the Ang Mo Kio Avenue 1 siete in May. “Developers know that it’s not easy to secure GLS sites given the prevailing bid prices,” says Ismail Gafoor, CEO of PropNex.

Both sites are located in the suburbs or Outside Central Region (OCR). At such land prices, property consultants reckon the new developments at Ang Mo Kio Avenue 1 and Lentor Central are likely to test new price benchmarks of $1,900 to $2,100 psf. Parc Komo sold 17 units on the back of the launch of Pasir Ris 8 over the past 1.5 weeks, and the developer is now looking to adjust prices upwards by 3% to 5% (Photo: Samuel Isaac Chua/EdgeProp Singapore)

Price increases of up to 5%

“Developers that have sold at least 50% of the units in their projects in the OCR or RCR [Rest of Central Region], and have priced them sensitively, are now looking at revising prices upwards -- anywhere from 1% to 5% -- on the back of home-buyer demand,” adds Gafoor. “Any adjustments above 5% to 10% is likely to be met with resistance as there’s still a wide gap between the prices of new launches and resale properties.”

In the east, Parc Komo (a redevelopment of the former Changi Garden), located at Upper Changi Road North. The project sold a total of 17 units over the past 1½ weeks, on the back of the launch of Pasir Ris 8. This brings total sales to 174 out of 276 units (63% sold) in the freehold development. Average price achieved is $1,564 psf. The developer, CEL Development, is expected to increase prices upwards by 3% to 5%.

There was spill-over demand from Pasir Ris 8 to Sengkang Grand Residences too. The 99-year leasehold, integrated development linked to the Buangkok MRT station in Sengkang is developed jointly by CapitaLand and City Developments. The 680-unit project saw a total of 45 units sold last week at about $1,700 psf, with the majority sold over the weekend of Pasir Ris’ launch. This brings the take-up rate of Sengkang Grand to 78%. The two-bedroom units are fully sold, with just a few two-bedroom-plus-study premium units available. The developer is expected to adjust prices upwards by between 1% and 2.5%.

Treasure at Tampines (former Tampines Court) could also see some price adjustments. The 2,203-unit, 99-year leasehold development by Sim Lian Group is 93% sold at average price of $1,346 psf, according to caveats lodged to date. The project has only 161 units available for sale. Ki Residences, which is over 62% sold, will also see price adjustments in the 3% to 5% range in August (Photo: Samuel Isaac Chua/EdgeProp Singapore)

At Sunset Way, off Clementi Road, the 660-unit Ki Residences at Brookvale (former Brookvale Park) has sold 411 units since its launch last December. Average price achieved in the 999-year leasehold project is $1,787 psf. The developer, a joint venture between Hoi Hup Realty and Sunway Developments, is also looking to adjust prices upwards by 3% to 5%. (See: Browse newly launched condos in Singapore right now)

Meanwhile the 1,468-unit, 99-year leasehold Parc Clematis (former Park West condo) at Jalan Lempeng is 84% sold to date, with average prices in the $1,650 to $1,680 psf range. The developer, SingHaiyi Group, is looking at price adjustments of about 1%.

Other projects are also said to be looking at adjusting prices upwards in the coming month, with the majority in the 1% to 4% range. “This [price increases] is expected as developers gain further confidence from the depth in buyers’ demand,” says Alan Cheong, executive director of Savills. “But what I fear is that this may trigger FOMO [fear of missing out], which may raise the government’s alarm bells.”

What made Pasir Ris 8 stand out was the fact that the integrated development had only 487 units, but the developers, Allgreen Properties and Kerry Properties, collected more than 1,500 cheques as expressions of interest in the lead-up to last weekend’s launch. 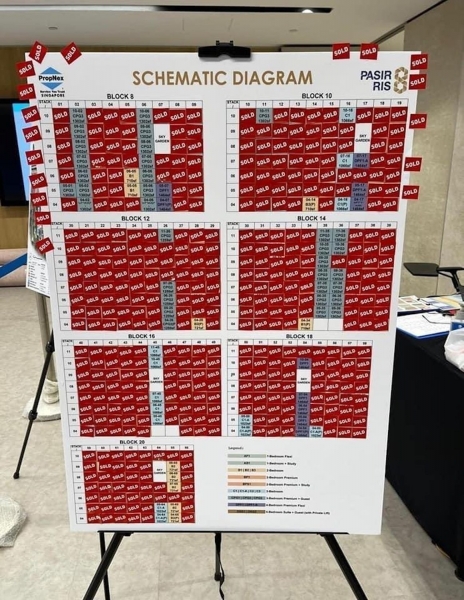 The units at Pasir Ris 8 were more than three times subscribed in the lead up to its launch (Photo: Agent)

“It was more than three times subscribed,” says Desmond Sim, CEO of Edmund Tie. “It hit the sweet spot with both upgraders and investors in terms of its location and price quantum. It is similar to the IPO process: If demand is greater than supply, then prices will be higher.”

Savills’ Cheong was not surprised by the strong demand seen at Pasir Ris 8: “It’s the first major launch in Pasir Ris in seven years," he says. “The Pasir Ris area was thirsting for a new project.”

"Demand is clearly the key driver as well as initial under-pricing," says James Crawford, head of valuation, JLL Southeast Asia. “Demand is underpinned by low interest rates, a rebound in buyer confidence due to the strong likelihood of an economic recovery, manageable pipeline supply, FOMO and some concern that cooling measures will be tweaked in the short term. It’s also a rare launch of an integrated development with a high-profile developer.” Sengkang Grand Residences saw 45 units sold last week, with the majority sold over the weekend on the back of Pasir Ris 8's launch, with units sold at about $1,700 psf (Photo: City Develoments)

In an email response to questions from EdgeProp Singapore, URA said that "prices of properties sold are determined by developers based on market conditions. URA monitors the marketing and sale practices of developers and when necessary, adjusts our policies to ensure that the interests of property purchasers are protected.”

On the strength of Pasir Ris 8's launch, the week of July 19 to 25 saw new home sales surge to 747 units – three times the volume of the previous week's 243 units, according to a Huttons Report. "This is highly unusual given that we are in the Phase 2 (Heightened Alert) state," says Savills’ Cheong. Transactions in the Core Central Region made up only 35 units, while RCR transactions accounted for 102 units. It was OCR deals accounted for 610 units or 81.7% of the transacctions, of which Pasir Ris 8 made up 415 units. The result was that new home sales in the OCR jumped more than fourfold from 140 units the previous week.

The increase in both transaction volume and prices in the OCR are driven by upgrader demand, says Eugene Huang, founder of Redbrick Mortgage Advisory. “I don’t see prices coming down within the next five years,” he says. “The last time I saw this happening was four years ago when I bought my current home at Sanctuary Green for about $1,036 psf. Within a year, prices shot up by 20%, and now prices are in the $1,300 to $1,400 psf range. That’s a 25-35% price gain in just four years. I’m looking for a new home, and I’m not going to hold out and wait for prices to come down.”